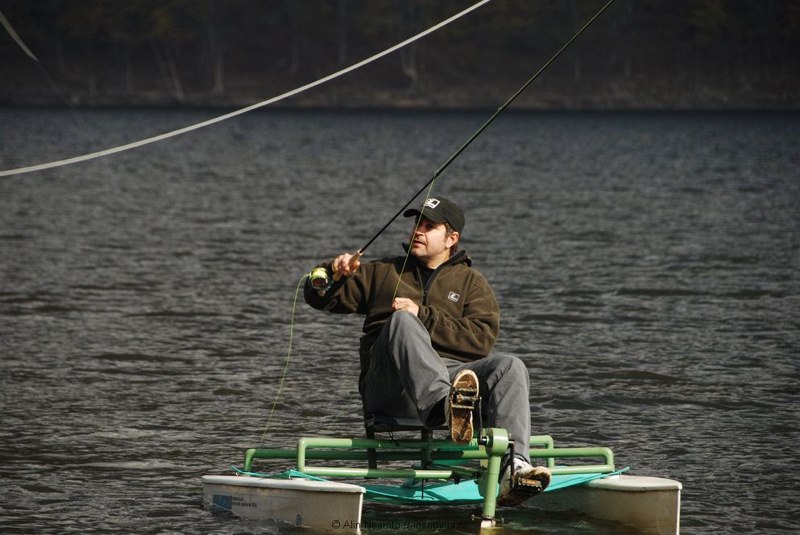 Did you have the occasion to try the S1waterbike, when, where and how many times?

Thomas Berggren:
First time I tried S1 Waterbike was when I recently visit Romania for the first time. It was in Zetea Fly Fishing days and the main reason of why I was there was to give Casting demos and workshops representing Loop and Federation of Fly fishers. I tried the Waterbike two times during these days.

What is your general impression given by S1Waterbike compared to the boats used before?

I have used regular boats and belly boats a lot and have good experience from them, but this Waterbike was something completely different. It has all the good characteristics as the regular boat and belly boat, but not the same disadvantages. I mean as in comparison to the regular boat the Waterbike have the same speed and maneuver abilities but you don’t have to occupied you hand for rowing. On the Waterbike you have both hands free for casting.
in comparison to the belly boat the Waterbike is quiet and you have both hands free for casting but you don’t have to be cold by sitting in the water and you can go in all directions with the Waterbike. It’s very difficult (almost impossible) to go forward in the belly boat and also the Waterbike give you a greater distance between the rod tip and the water surface because you’re sitting higher above the surface and that’s result in easier casting.

On what kind of waters did you try the S1waterbike?

Did you notice improvements in fishing and catches with the S1waterbike?

Yes! As I described in my general impression. Fast moving, good maneuver ability in all direction, both hands free for casting, easier to cast because I’m sitting higher above the water surface and of course it was very comfortable and relaxing to move around and fish different spots on the lake.

How does the S1waterbike works for you?

I remember my first time in a belly boat and it took some time to learn to maneuver it and it was about the same with the Waterbike, perhaps I learned to maneuver the Waterbike a bit faster, but I think you have to calculate to spend 15 minutes practicing before you have full control.
Another thing that I’m thinking of is to use it in a River. We normally use this small types of pontoon boats that we rowing to the spot in the river and then anchor to get our hands free for casting. With the S1 waterbike I think I can just keep the it steady in current and fishing and the a quick repositioning to fish another spot.
I didn’t get the chance to try it in a river, but I’m would really like to, because I think it would solve this type fishing situation very well.
Would you choose the S1waterbike from other boats in the same price category?

What do you think it should be done in order to improve the product?

Not much! I think it’s fine. Perhaps there could be a value if the customer have the possibility to choose between the standard floaters and inflatable pontoons. The standard floaters resist drift in wavy water and the inflatable floaters needs less space when transporting it. But my general impression is that it’s fine as it is.
How do you see the future for the S1waterbike?

I think we will see several of them in the future. As soon as people actually get to know and understand the simplicity of using and transporting the S1waterbike there will be a good take off. I think it’s easy to understand that it solve a lot of fishing situations as well as other operations like filming, photographing and bird watching and so on, because of the marvelous maneuver ability without using any hand, and that I saw immediately! My first question was if it was difficult to transport and put together. And also for that point the S1waterbike surprised me, I was amazed about the simplicity.
I’m quite convinced that people will find good use for it and starts to buy it when they understand that it’s not more difficult to put the S1waterbike together and launch it than it is to inflate your belly boat and put waders and fins on.